Few car companies approach the level of design bravado achieved by the Nissan Juke. Nissan’s engineers and designers have captured the essence of what makes each popular vehicle desirable and recoded them into one vehicle using Nissan DNA. In the Nissan stables, there are worthy building blocks to execute this idea, like the 370Z, the X-TRAIL, the QashQai and the GT-R. And so, the core ideas of a dynamic sports coupé, a memorable hatchback and a useful offroad/utility vehicle are blended into a brand new flavour of crossover that feels something like a MINI Countryman or a miniature BMW X6.

We recently featured the new Ford Ranger that demonstrated advanced capabilities and the new Fiesta, which delivered exceptional driving dynamics and great features while being frugal at the pump. We were curious about where the new world-platform Focus would fit in since the Fiesta was now overlapping into its previous market position.

As we walked into the dealership, we realised that the Focus had grown considerably from the last time we saw it. So far, only the sedan version is available, as the hatchback is still in transit. This sleek, new car is one of Ford’s slipperiest bodies yet, with a drag coefficient of just 0.297 for the sedan version. Its shape was penned by Ford’s executive director of design, Moray Callum who also designed the Mazda3, while His brother Ian Callum is now head of design at Jaguar. The new Focus was developed and tuned in Germany and the upcoming hatchback version promises to deliver even sharper handling.

The Captiva was born in 2006, heavily inspired by the 2004 Chevrolet S3X concept, which was developed at Daewoo for the GM Theta platform. The facelifted Chevy Captiva, which now incorporates a large new grille based on the Chevy Aveo, along with a few other improvements, broke cover internationally in late 2011 and is finally available in Trinidad and Tobago as a 2013 model from Lifestyle Motors.

The Chevy Captiva is available as a five- or seven-seater SUV and although very roomy inside, retains a compact appearance. It is powered by a 4-cylinder 2.2-litre turbodiesel engine, making 184hp and an impressive 295ft-lb of torque. Power is fed through a 6-speed automatic and the AWD system. We estimate the 0-60mph time to be in the 9s range, which is quick for a vehicle of this size. Hill descent control and hill start assist are also standard on the new model, which are great for on- and off-road gradients, especially where traffic is involved. The suspension uses a McPherson front and independent rear design.

Inside the Captiva has been completely redesigned with a new, modern theme. It also packs an eight-speaker CD/stereo system that is MP3-ready and has an auxiliary and USB port for an external audio player such as an iPod. Audio and air-conditioning controls are conveniently located on the leather wrapped tilting steering wheel and the driver gets an eight-way electrically adjustable seat. There are 12V power outlets in the front, rear and in the cargo area. The rear seats can also be fully folded down to maximise cargo room, along with the third row of seats in the seven-seater version. The rear window of the tailgate can be opened separately from the tailgate itself.

Roof rails, rain-sensitive wipers and side mirror indicators are also standard. Eighteen-inch sport wheels and fog lights complete the new look, along with Captiva-branded doorsills. Safety equipment includes dual front, side and curtain airbags and four-wheel disc brakes with ABS, stability and traction control and parking sensors. Reports indicate that the current generations of Chevys are proving to be very reliable, and with this latest Chevy Captiva, the brand continues to improve the quality of its offerings. At TT$375K the Captiva brings a welcome alternative to the existing mid-sized SUV market. Look out for a test drive in an upcoming edition of Zorce.

Sport, as it pertains to cars, comes in all sorts of flavours these days. You can have it mild, wild, shaken or just stirred in to enhance the formula to make any car that much more stimulating. Hyundais of late have been uniquely exciting cars, because they have finally hit the mark in terms of value, style, product differentiation, reliability and as such, resale value. We featured the launch activities for the Hyundai Veloster in the last issue and after months of waiting and being told that our test drive cars had already been sold we were finally able to dip a finger or two in the pudding as it was finally time to drive. 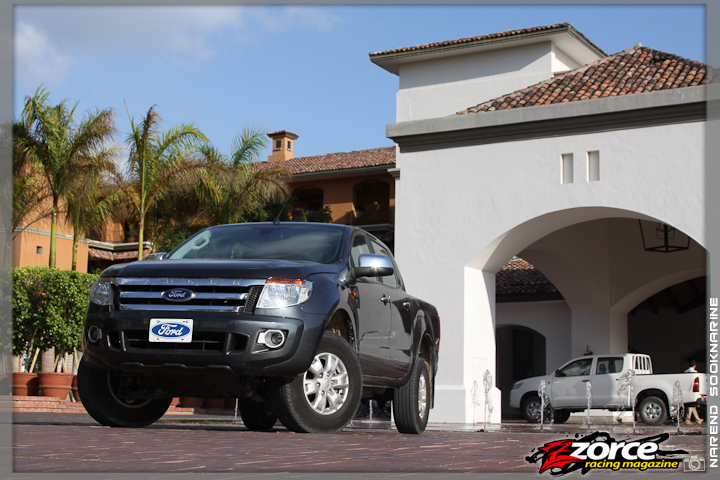 The atmosphere was bristling with anticipation as our group of invited journalists from the Caribbean and Central America was warmly received at the lavish Bristol Buenaventura Resort Hotel on Panama’s Pacific coast, some two hours from Panama City.

On our first official evening we joined Ford officials and other media representatives for cocktails and dinner. Naturally, the new Ford Ranger was the hot topic of the evening and everyone spoke glowingly of Ford’s performance in their respective markets versus the competition from Nissan and Toyota. We heard from Chris Sirju of The Gleaner about the remote, mountainous regions in Jamaica where Suzukis and Land Rover Defenders are the only means of getting around due to the crude roads and limited infrastructure. Everyone, it seemed, was well aware of who the real performers were in the current market. We did all agree on one thing though– the last few generations of the Ranger had excelled in terms of sales, reliability and on- and off-road performance, a fact that was reflected in the large numbers of happy owners. The Ford team skillfully recognised our concerns and noted our comments without giving away too much.