Aspiring Porsche fans around the world often look at the fastest models as the benchmark for performance. Coupé models usually showcase the full range, from the entry level 911 Carrera all the way up to the 911 GT2RS, while the cabriolet models add the panache and adventure of the wind in your hair experience, with a distinct disregard for the possibility of rain, something enjoyed by more seasoned Porsche owners. If you’re thinking like a Porsche engineer, is there room for something between? There is, and since 1965 it’s been called the Porsche 911 Targa. Today’s 2020 versions are making their debut in all-wheel drive form as the new Porsche 911 Targa 4 and 911 Targa 4S models, keeping the tradition of innovative extravagance and elegance alive.

Background check
To be a coffee-table expert on the Targa, you’ll need a few quick details from its origins. In a time when road safety fanatics were calling for bans on all convertible cars, the 1965 Porsche 911 Targa was marketed as a “safety cabriolet with an anti-roll bar”. With a detachable roof, the Targa soon gained popularity as a car that combined the advantages of open top driving with the everyday comfort and safety of a coupé. The Targa name came as a reference to the Targa Florio, a road race in Sicily where Porsche was very successful since the mid 1950s. Although the literal translation of the Targa name is “number plate”, the name persisted as the better alternative to 911 Flori. Fast forward to the present and the Targa’s signature styling– a wraparound rear glass window and wide roll hoop has been reinterpreted. In today’s model you can automatically open and close the roof in just 19 seconds.

For maximum driving performance, both models are factory fitted with the 8-speed dual clutch transmission and intelligent all-wheel drive Porsche Traction Management (PTM) as standard. However, driving purists can opt in for their nirvana– Porsche’s newly developed 7-speed manual gearbox, paired with the Sport Chrono package on the Porsche 911 Targa 4S. When fitted with Sport Chrono, the 911 Targa 4 completes the 0-100 km/h sprint in just 4.2 seconds, faster by a tenth of a second and run to a top speed of 289 km/h. The 911 Targa 4S achieves the benchmarks at 3.6 seconds (four tenths of a second faster) and gains 3 km/h to top out at 304km/h. Both models feature evolved front-axle drive systems where the clutch and differential are now water-cooled along with reinforced clutch discs. Combined with PTM, even better traction in all weather conditions is expected.

...driving purists can opt in for their nirvana– Porsche’s newly developed 7-speed manual gearbox, paired with the Sport Chrono package on the Porsche 911 Targa 4S.

Innovations and Chassis Dynamics
Along with PTM, the new 911 Targa features Porsche Active Suspension Management (PASM) as standard, automatically adjusting damping between comfort and handling as the situation demands via two manually adjustable modes– Normal and Sport. Porsche Torque Vectoring Plus (PTV Plus) includes an electronically adjustable rear differential with fully variable torque distribution as standard on the Targa 4S and optional on the Targa 4. Porsche Wet mode, where sensors detect significant levels of surface water, is also included as standard. This system recommends that the driver switch to Wet mode, which adapts the car’s responsiveness accordingly to ensure maximum stability.

Like other eighth-generation (992) 911s, both Targa models feature staggered wheel and tyre packages. The 911 Targa 4 features 235/40 ZR tyres on 19-inch alloy wheels at the front and 295/35 ZR tyres on 20-inch wheels in the rear. The 911 Targa 4S goes one size up with 245/35 ZR tyres on its 20-inch front wheels and 305/30 ZR tyres on its 21-inch rears. How are things in the stopping department you ask? On the Targa 4 you’re looking at 330mm four-piston monobloc fixed calipers all around, finished in black. Red 350mm calipers all around, with six-piston brake calipers at the front and four-piston calipers at the rear are standard on the 911 Targa 4S. Porsche Ceramic Composite Brake (PCCB) is an available option on both models.

The Targa design and interior highlights
Like the current 992 models, the Targa features more pronounced wheel arches at the front, LED highlights arranged in the latest standard configuration from Porsche, and the sloping bonnet with a slight recess– a throwback to the first 911 models. At the rear the car is wider, with the distinctive, yet well-integrated horizontal light bar and larger variably extending spoiler. A significant amount of the car’s outer skin is now produced out of aluminum.

The interior has been inspired by the 911 models of the 1970s, with straight lines and recessed instruments. Naturally things remain fully modern thanks to two thin frameless freeform display units that provide supplemental information to the driver. Under the 10.9” centre screen, a five-button central switch unit provides shortcut access to key functions of Connect Plus, and the Porsche Communication Management (PCM) system, which is now able to enhance navigation with swarm data in markets where these features are supported.

The system has been further developed and simplified, now with just two moving parts– the soft top and the rear glass window (made of laminated safety glass), as per last generation’s design.

If you’re a fan of the Transformers movies you will be amazed by the Targa’s unique roof mechanism every time it is activated. The system has been further developed and simplified, now with just two moving parts– the soft top and the rear glass window (made of laminated safety glass), as per last generation’s design. The dome shaped rear window tilts back and at the same time, two flaps in the Targa roll bar are actuated open and release the soft top kinematics. The soft top is unlatched and folds into the rear in a Z-shape (hidden Zorceness hahahaha– Ed.) as it opens, and stows behind the rear seats. Then the Targa roll bar’s flaps close and the rear window is returned to its original position. A wind deflector can be manually installed for reducing wind buffeting in the car at lower to mid-level highway speeds. 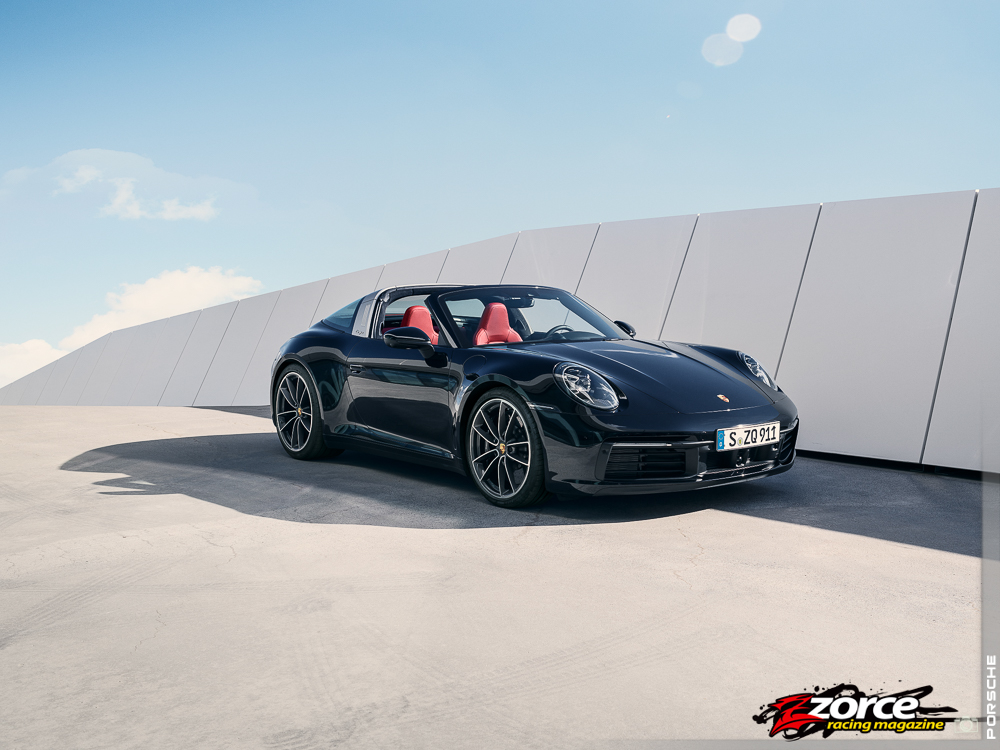 Concluding thoughts...
Of course the Park Assist system, which is standard, monitors the area behind the vehicle to ensure that the rear window isn’t swiveled into an obstacles such as a well or another vehicle. A retractable top isn’t something unique to the brand, but the Targa solution has always been about Porsche’s tradition of innovation and elegance, along with the pure aural pleasure of driving an open top Porsche. The 2020 Targas are expected to become available in the 3rd quarter of the year, no word on pricing just yet, but we will update this article as soon as that information becomes available. Until then enjoy the gorgeous photos and videos.