Toyota Trinidad & Tobago launched their new 2019 RAV4 earlier this year and we couldn’t wait to drive their all-new mid-size crossover sport utility vehicle. Although it was a slightly steeper and more winding route than usual, we planned Fort George into our test drive loop to fully enjoy the RAV’s capabilities and the location’s amazing vistas. Was it going to be as good as the hype? We jumped into a 2019 RAV4 2WD high-spec version to find out!

A visual delight for most utility and off-road vehicle fans, the latest RAV4 is wonderfully boxy and roomy. Lots of trendy angular and octagonal styling features and facets can be found throughout its design and even the wheel arches are more square-shaped.

The overall look is rugged, functional, and slightly burly, without looking overly aggressive. The beltline has also been lowered and the windscreen and window shapes have been enlarged and optimised for a wider and more commanding view of the roadway ahead and on each side of the vehicle.

A visual delight for most utility and off-road vehicle fans, the latest RAV4 is wonderfully boxy and roomy.

Open the bonnet and you’ll see Toyota’s 170hp (at 6600rpm) 2.0-litre, 16-valve, fuel injected, four-cylinder M20A-FKS engine, which now features with VVT-iE on the intake, and standard VVT-i on the exhaust camshafts.

Most RAV4 owners probably won’t go further than savannah grass, a few dirt trails or bad roads and maybe some beach sand– basically on-road usage or soft-roading. The heavy-duty off-roading such as Grade 4 trails, quarry runs and desert sand dunes are more likely to be tackled by the Toyota Hilux or even the Land Cruiser Prado, perhaps with a few modifications. However, our curiosity was piqued by the AWD-i version’s multi-terrain select dial that allows you to choose between mud and sand, rock and dirt, snow and normal modes and will automatically adjust throttle, apply brakes and distribute torque to maintain traction. Can you say “hidden capabilities”? We’d love the chance to try a 4WD version (available via special order) out in a few off-road situations.

The hills of the Lady Young Road posed no problem for our FWD RAV4 in terms of power or gearing. In the standard mode on the steeper sections heading up to Fort George, it was slightly trickier to find the sweet spot on the throttle to maintain a steady speed climb without accelerating sharply. Here, the engine and transmission seemed happier in sport mode, which allowed the engine to maintain speeds using higher rpms. The RAV’s sharper sport mode throttle response and the transmission’s ability to shorten its gearing makes quick work of turning onto major roads, merging, and enjoying corners strung together. Feeling to cruise? Eco mode keeps the rpms low and the pace relaxed, while sipping fuel. Normal mode is best for everyday driving.

Do you secretly enjoy hustling? The RAV’s corner entry is crisp, smooth, and inspires confidence– no surprise with its excellent 51/49 front-to-rear weight distribution. Body roll was a lot less than I expected through low speed turns, medium-pace sweepers and also at highway speeds. Drive it autocross style and you will eventually find understeer at the limit. Braking was also excellent. During our panic brake test, we noticed that dive and squat during acceleration and braking have also been reduced. Evasive manuoeuvres were also no problem. No longer bland, the new RAV4 now has genuine character when it comes to driving dynamics, all while maintaining their trademark compliant ride quality.

The RAV’s turn in is crisp, smooth, and inspires confidence– no surprise with its excellent 51/49 front-to-rear weight distribution.

How did Toyota achieve this impressive balance? One example of its engineering refinements is the positioning of the fuel tank ahead of the rear axle, and distribution of its weight evenly between the wheels. Another is the relocation of the electric power steering assist motor from the steering column to the rack itself for more direct steering feel. The rear suspension is now a double wishbone setup with revised geometry, which allows more compliant springs to be used to ensure smoothness.

The rear suspension is now a double wishbone setup with revised geometry, which allows more compliant springs to be used to ensure smoothness.

Toyota also evenly distributed component mass on left and right sides of the new RAV4, by design and the all-new chassis offers big gains in rigidity and a lower centre of gravity than ever before. The wheelbase has been lengthened (by 30mm) and front and rear overhangs reduced (by 5mm, and 30mm respectively)– improving approach and departure angles, weight distribution, dive and squat, and stance all at once. The new RAV4, built on Toyota’s new GA-K (TNGA K– Toyota New Global Architecture) platform, is overall 5mm shorter, 10mm wider, and sits 10mm lower than the previous version. Additionally, the RAV4 also manages to deliver 15mm more ground clearance. If you want to have an idea of how long Toyota has been tinkering with this formula, google the Toyota RSC concept.

The polygonal theme continues throughout the interior–including the glove box, storage areas, central display unit, doors and more. The design language also spills over into the stitching and perforation patterns of the seats, which themselves feature electrical adjustability for the driver and independent ventilation for both driver and passenger. The arm rests and a few other surfaces are soft touch padded– a definite step up in cabin quality.

Front seat occupants can enjoy individual air-conditioning system controls while rear passengers can share a central vent. Toyota’s new S-FLOW system is able to intelligently sense and provide cooling when a passenger occupies the seat. Throughout our drive, the seats remained comfortable and supportive. Overall, the new cabin is also a much quieter space than I remember from previous models.

The modern interior styling made the cabin feel up to date, as did the technology. I was easily able to connect my phone to the stereo system via Bluetooth. On the factory settings the audio system sounded a bit flat, but with some adjustments we were able to enjoy our test music playlist (which includes both Soca and EDM) all the more. The RAV’s voice recognition system worked reasonably well, but took a few tries, along with a reduction in my Trinbagonian twang to work properly. The large central touchscreen also worked well and the interface seemed quick and responsive.

Lots of 12V and USB charging ports are also provided, plus there’s with a wireless charging dock, which works with phones that are so equipped. Once you remove your phone from its aftermarket case, it works, although we did notice that some protruding camera housings could sometimes interrupt charging. 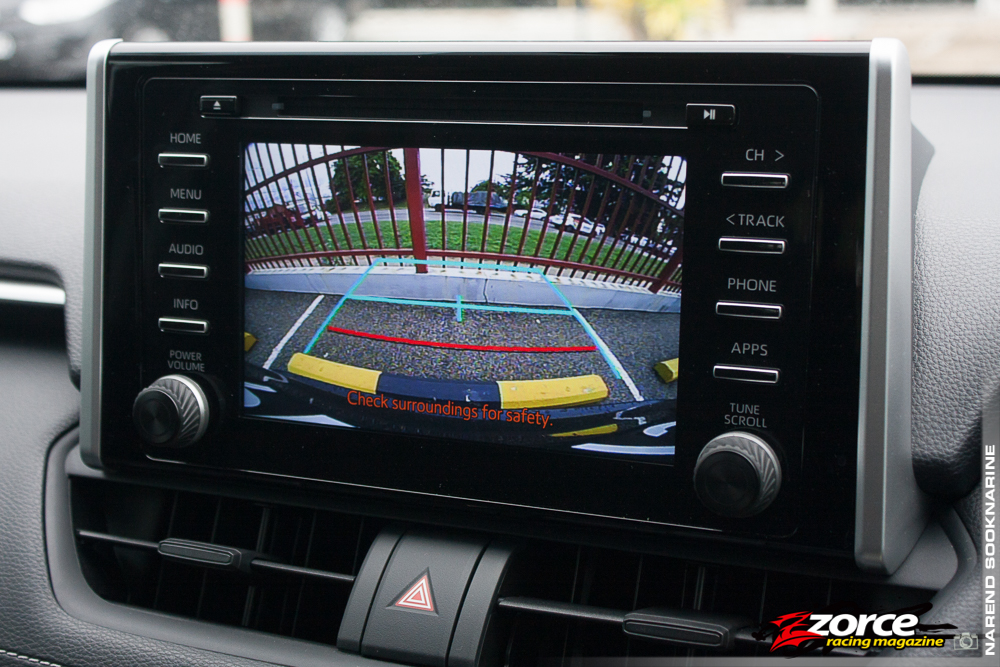 Lots of 12V and USB charging ports are also provided, plus there’s with a wireless charging dock, which works with phones that are so equipped.

Out in the back, the rear cargo area features a fully flat floor, which should make sliding items in and out of it a bit easier. The overall cargo area has also been generously increased by 79 litres more than the previous generation RAV4 (580 litres total with all seats in place). Should the need ever arise, the RAV4 is able to protect its occupants with a total of nine airbags.

According to Yoshikazu Saeki, the RAV4’s Chief Engineer at Toyota: “At the very beginning of the design process we thought about how best to evolve the original concept. This led us to the new concept of Adventure and Refinement.

Adventure sends out a simple, strong message that drivers can drive anywhere they want, expressing waku-doki – the equivalent of ‘heart-pumping excitement’ in Japanese.

Refinement is expressed in a sophisticated design that fits in with an urban setting. “Combining these contrasting elements enhances the new RAV4’s unique value.

Furthermore, its wide stance, large tyres and raised ground clearance create a strong image, which have further emphasised with the polygon design theme and the vehicle’s multipurpose capabilities. Just looking at the new RAV triggers the urge to get in and go somewhere.

“Where vehicle performance, handling and stability are concerned, we defined the key concept as ‘Confident and Natural’ – with the driver’s sensibilities at the heart of everything. As a team we put great effort into improving the driving experience by focusing on enhancing tyre-to-ground contact, stable and natural cornering and smooth, responsive driving. “We’ve improved the RAV4’s performance to meet the demands of any road.

Whereas a conventional SUV suspension makes for an uncomfortable, unresponsive ride in off-road conditions, the RAV4 provides sedan-like comfort and an enjoyable ride.” 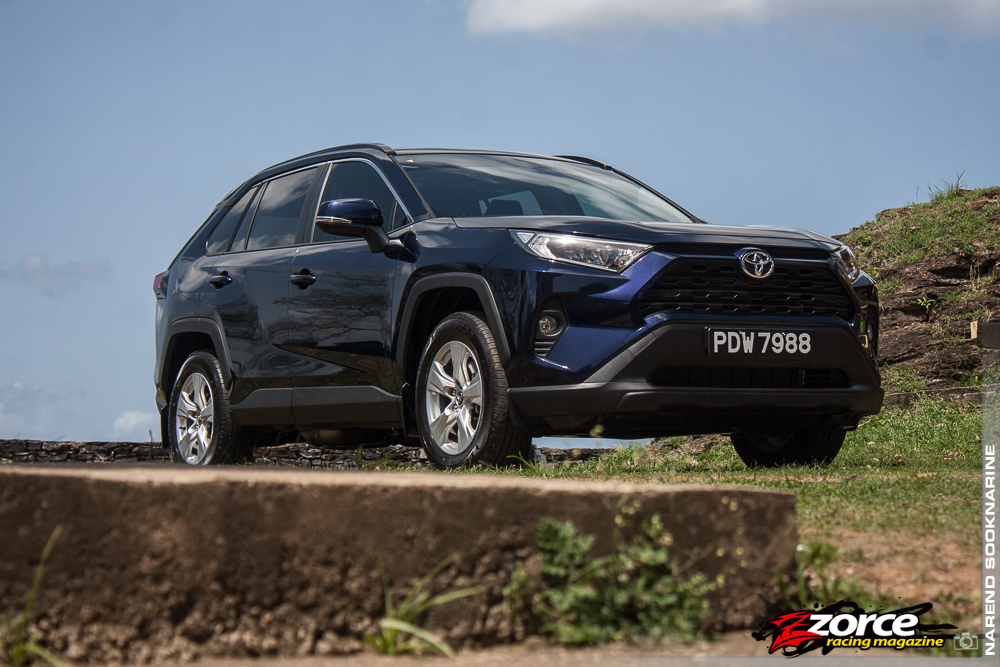 So, has Toyota achieved its new vision for the RAV4? We certainly think so. While I have a preference for high-performance and sports cars, the RAV4 was enjoyable to me as a driving enthusiast, for an SUV, at everyday speeds. With its regular strong points such as its utility, and features, what’s not to like?. Well, there is the pricing, which is higher than the previous version. However, Toyota delivers significant value in this new model. Pricing starts at TT$345K on the mid-spec version, TT$375K on the fully loaded version with fabric seats, and TT$419K for the fully loaded version with leather seats. So you’ve gotten a review from us, now all that’s left for you to do is go take a demo drive with one of the sales representatives from Toyota!

While I have a preference for high-performance and sports cars, the RAV4 was enjoyable to me as a driving enthusiast. With its regular strong points such as its utility, space, and features, what’s not to like?