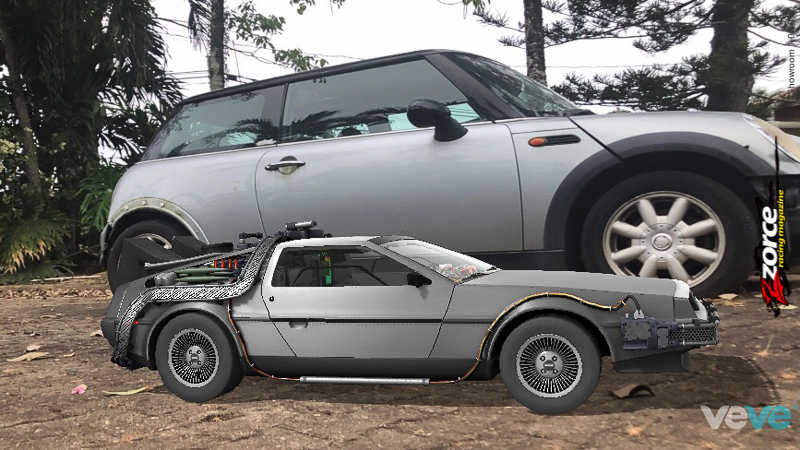 Imagine collecting model cars that you don't actually have to carry in your pocket, or display on your shelf– at least not in the traditional sense. Part of a new phenomenon called non-fungible tokens, or NFTs, as they are commonly referred to, are a series of digital collectibles– and in this case, an officially licensed digital version of the popular DeLorean time machine from the movie Back to the Future. If you thought this article was going to be about buying cars with cryptocurrency, you haven’t scratched the surface.

NFTs are essentially digital collectibles that can be purchased on specific platforms, then stored, curated, traded or even resold at a profit to other users as their ownership can be traced via blockchain technology. We have seen NFTs, such as for art  produced by the famous American digital artist Beeple, sold online for close to US$70 million– and the latest craze– NBA-licensed digital video moments that have become the new basketball trading cards, often bought for as little as US$15 and traded for tens of thousands depending on their rarity and significance. Some cards are so rare that there are as few as three copies produced, while others number in the thousands. What a way to monetise lifetimes of video archives! NFTs are quickly becoming their own dynamic form of cryptocurrency.

Apart from the criteria of artistic excellence, creative expression, and perhaps, the right timing, NFTs can be subject to many of the usual measuring sticks used to determine what makes a great collectible. Popularity, price and overall desirability all have a part to play. While they are still in the emerging phase, the potential is limitless.

Commodities such as stamps, bottle caps, guitars, memorabilia, sneakers, music, cars and even toys were traditionally obtained at events such as auctions, expos, flea markets, garage sales, and major conventions– or just by going to the store. In today's world, tangible collectibles can be bought, sold and traded online via platforms such as eBay and Amazon, or maybe even a WhatsApp chat group or a popular Instagram page. But now things have gone a step further with the introduction of websites that are specific to the NFT space and apps developed for both the Apple and Android platforms that allow you to purchase– and interact with– your digital collectibles.

I decided to take a leap of faith and installed the Ve-Ve app, and to my delight, there was an upcoming digital drop of the Back to the Future DeLorean available in three different versions. 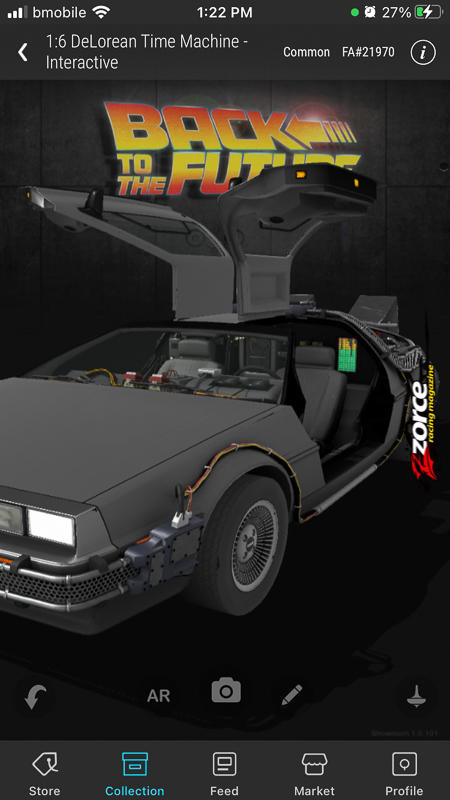 I eagerly awaited the countdown on the app to be able to purchase the DeLorean the moment it became available. However, due to the app being overloaded with over 115,000 requests per minute, the app was temporarily shut down, leaving only the common version available.

Sometime the next day, I saw my digital DeLorean in my Ve-Ve app’s Collectibles area and promptly took it for a spin on the virtual turntable. I was able to let the car spin, open the doors, stop it whenever I wanted to, change the angles as I liked, and even pinch-zoom my way into the driver's seat.

I was able to let the car spin, open the doors, stop it whenever I wanted to, change the angles as I liked, and even pinch-zoom my way into the driver's seat.

It’s such a unique experience, particularly when you know that this item is sold out– making it all the more exclusive. The ultra-rare and rare versions had been snatched up within minutes. Still new to the app, I noticed an AR icon, which when clicked, activated the augmented reality feature within the app. With a bit of swishing around, the app recognised the flat surface of my desk, and I was able to place the car next to my now empty breakfast plate.

With a bit more tinkering, I was able to hold the DeLorean at a slightly larger size in the palm of my hand and, naturally, I ended up outside and placed it in my driveway next to the Mini Cooper.

With a bit more tinkering, I was able to hold the DeLorean at a slightly larger size in the palm of my hand and, naturally, I ended up outside and placed it in my driveway next to the Mini Cooper. Had it been the 1:1 scale version, I would have had a virtual full-size DeLorean in my yard. Yet, it was still very cool to see, and even cooler later in the evening to nab a picture of it in the atrium of MovieTowne, Port of Spain. I wonder if anyone who saw the Zorce Instagram story ran down there to see the display?

I’m already a Hot Wheels die-cast car collector and purchasing the DeLorean had a very familiar feeling of ownership, the only difference being that this was a virtual item. How could I spend US$30 on this? Today’s gaming companies offer in-game or in-app purchases made after purchasing the console and/or downloading the video game itself, so why not? Less than 24 hours later on eBay, people were selling the exact same collectible peaking around US$250 for the common version I had just bought, while 1:1 scale ultra-rare interactive collectibles of the DeLorean got asking prices closer to US$1,000. Who knows where these will be over time?

That aside, the car collector in me is mind-blown. This was not a pocket companion such as a Hot Wheels die-cast car, yet I could still enjoy it in three dimensions, in a way that a digital photo or printed poster can’t do. All I need is my smart device and an internet connection to enjoy this digital collectible all day long, shared with anyone, anywhere.

All I need is my smart device and an internet connection to enjoy this digital collectible all day long, shared with anyone, anywhere.

You often hear about stories where people are looking to cut out the middleman, usually a distributor much in the same way Tesla insists that they can directly sell to customers. But will this amount to a virtual cancellation of the item’s manufacturer? It remains to be seen whether the average consumer will be satisfied enough with a digital version of their car, such as this 1:6 scale DeLorean. In my experience, collectors who love cars just need to get their hands on every single version they can– the real one, all the different scale models of it, and a folder full of photos and videos of it, if they love that particular car badly enough. So maybe there is room for digital NFTs alongside the usual real-world offerings?

I guess this is another one for the record books–  my very first NFT is a car. As an auto enthusiast, I couldn't be happier, unless I won the real thing in a lottery. I hear an agreement with GM is already in the works, too.

ECOMI, a Singaporean a tech company leading the way in the emerging digital collectibles space introduced its proprietary Ve-Ve app in December 2020. The Ecomi (currency symbol OMI) is the company’s eponymous cryptocurrency. You can see their very active twitter pages here and here to get news on the app's progress and latest drops.

Top crypto-investors have predicted that Ecomi will skyrocket (a social media trend often symbolised by the rocket emoji), so I had to buy in. (Private message me if you want details on the OMI token buying process.) The digital space is evolving– now coin-based funding can drive projects forward, beginning the idea of decentralized finance (DEFI) into reality. Coins can be bought, sold, swapped and staked– the crypto-space version of a fixed deposit, with varying rates of interest and accompanied by the occasional airdrop where you can earn reward tokens.

I can't wait to see what other car-related and movie-related vehicles such as spaceships or aircraft they will create in this brave new space.

I can't wait to see what other car-related and movie-related vehicles such as spaceships or aircraft they will create in this brave new space. They’re already doing digital sculptures of major entertainment and pop culture characters such as Batman and the Power Puff Girls. Other companies, projects, coins and NFTs have emerged (for franchises such as F1 with the REVV token), as the market is encouraged by Beeple and NBA Top Shot’s success.

Disclaimer: This article is NOT financial advice. Past profits do not guarantee future gains.