So it didn't exactly have timing lights and a few very minor things need to be ironed out. It was however, Trinidad & Tobago Drag Racing Association's first official event and it was alot of fun. Billed as the official replacement for the popular 'gangsta' drags, TTDRA was actually born from the same series of gatherings. Now that it has been organised, we can look forward to safe, more organised Sundays at the Wallerfield tracks, provided of course there's no other Motorsport event on in T&T. The event was held on the circuit track with permission from TTASA and eTECK (PIDCOTT). While some big guns declined to even attempt running on this rough southern track, the street cars had a welcome field day.

The event was held to provide relief for the people of Grenada with canned foods and bottled water being collected at the door in addition to the proceeds from the meet itself. Attendance was nothing short of stellar and an entire pickup tray was overflowing with contributed goods to be shipped to our brothers in need after hurricane Ivan devastated their homeland. Best runs of the day included an 11.3 record setting pass by Faisal's daily driven Evo7, 11.494 from Andre's muscular Dodge Charger and the RWD Street Champ, Yancee in his S14 Silvia doing 11.9. The show stealers however were the Daryan Warner's Porsche Gembella which bogged on the launch to run 12.8 while Shamu's 125cc shifter kart ran 15.0 @ 70.4mph

The Action started all over again with Sheik Leisha venturing into Rail-car 7 second territory. Sheriff Lobo shared licks on the tracks with a shifter kart and the RAIN elsewhere on the island fooled thousands into thinking Wallerfield was in a mess. Boy were they wrong!

From Vans to VW's, Starlets to Silvias, everyone is getting in on the dialup action - taking racing off the streets and to the track. 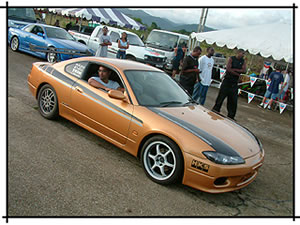