Sheldon's first qualifying pass of the day was a prelude to an amazing night at the Nitro Jam IHRA event at the Palm Beach Raceway. With a run of [email protected] he set the stage for a new IHRA Top Dragster World Record.

He later backed up this record officially in the 3rd round of qualifying, after an amazing transmission rebuild which was finished with only minutes to spare. After some fast pit work by Crew Chief Aaron Sipple and support from racers Eddie Careccia and a most generous sportsman, Larry Clarke who let the team use parts from his spare transmission, Sheldon posted a time [email protected] This made the new IHRA World record official.

Later on the same night, Sheldon ran the 1st round of eliminations, with a rocking pass of This email address is being protected from spambots. You need JavaScript enabled to view it. lowering the World Record even further! Sheldon Bissessar's record is not a simple one as in fact he broke the Top Dragster track record, posted the fastest ever MPH, qualified number one and advanced into the Elite 8.

The following night Bissessar wowed the sold-out stands with consistent five-second passes to advance to the finals against Edward "Fast Eddie" Careccia. Careccia, in an effort to take every extra millisecond tripped the lights early as Bissessar rocketed through a [email protected] run to take the win and the Elite 8 trophy! IHRA officials were definitely taking notice of the outlaw-looking machine and its consistent pilot and even the President of IHRA himself, Aaron Polburn came down to have a word with Sheldon, expressing his congratulations and inviting him to race with the IHRA again throughout the coming year.

Sheldon took part in the 36th Halloween Classic at Summit Motorsports Park , Norwalk Ohio, qualifying with the top speed , a blistering 192MPH. He made it through eliminations and to the finals, setting a new... Summit Motorsports Park Track Record - 3.77 sec. ET @ 193 MPH which also gave him the record for the fastest Pro Extreme Dragster ever in the history of NHRA Racing. So the Trinidad Rocket once again dominates in the USA in an event that is known as the Biggest Sportsman Drag Race in the World boasting 1500 cars and drivers making us proud by bringing home 2 more records for Trinidad and Tobago !! 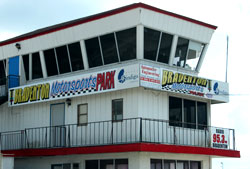 It was a great day for racing! Clear skies and bright sunshine... Well perhaps some clouds could have helped the intense heat. But can't complain as the usual Florida afternoon rains held off till after the event. We got to the track just about first round qualifying. Southeast Florida performance shops, Big Daddy Performance Center/ Vijay Ramkissoon  with his new Supra Mk4, ASAP Performance with their street EVO 8, Central Florida Turbo with their Galant VR4 & TD Autowerkes in their Civic, all dominated the day with their presence and consistent runs.

"Friday Night Chaos"
This event was packed with a total field of well over 100 competitors attempting to qualify. Sheldon was entering the Outlaw Dragster class which would be narrowed to a field of 8 after two rounds of qualifying.

A drag race showdown between the Mitsubishi EVO and Subaru - the ultimate rivalry!